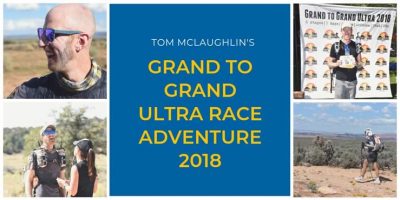 In September 2018, 22 countries were represented in a 7-day, 170-mile race that took place starting from the rim of the Grand Canyon to the summit of the Grand Staircase. The Grand to Grand Ultra Race is a self-supported foot race known to be a legendary feat of endurance. Sound crazy? QAT Global employee Tom Mclaughlin sure thought so- but that didn’t stop him!

Tom has done some ultra-running in the past, but nothing more than 30 or 40 miles and has never done stage races like the Grand to Grand before.  When Tom was first approached about the race he thought “that’s ridiculous, there’s no way.” However, after a friend said they had already sent in the money for the race, Tom knew it was no longer an option – game on!

Tom made a lot of plans for how he would train for this event, starting with participating in the Lincoln Marathon. With his training, he began to add mileage and weight since you must carry a pack and supply yourself with food and water for seven days. Tom’s pack during the race ended up being about 23 pounds with food and water – the good thing is it got lighter as the race days went on!

Unfortunately, Tom was injured during training and had a stress fracture in his foot. This caused a lot of doubts going into the race, but he knew there was no backing out. “The beauty of the race is that you do have doubts, but so does everyone,” Tom said during an interview. Tom went on to talk about how the mindset for everyone becomes “so what..”, because you are all in the same position – everyone is tired and sore, everyone is cold/hot, everyone is wet, everyone has blisters – there is really just no room to complain because it’s a shared experience. “It’s a choice we all chose to do, and no one is a victim,” Tom said.

It is a physical challenge, but it is doable if you have the right attitude and a positive mindset. Many of the participants were around 40-50, some even 70 years old. Meeting all different people and sharing this experience with them made Tom realize that there’s no reason to get old and stop doing what you enjoy, as there is so much more out there to experience. Tom said for him it was easy to fall into the trap of doing local marathons, but there is just so much more out there to experience to continue only doing those races. The Grand to Grand Ultra is really the only of its kind in the United States.  So, for Tom, running just went from a super cheap hobby to a super expensive travel experience!  Although several events and races would occur in preparation for Tom’s next Ultra Race adventure – in August of 2019 he hopes to participate in the Fire and Ice Ultra taking place in Iceland. We can’t wait for the time to come to cheer him on some more!