A big question many businesses face is whether their company would benefit from a mobile app and what type of app will produce the most return on investment. The two main mobile app development platforms that businesses must choose between are progressive web apps and native apps. While both options have pros and cons, it ultimately boils down to what approach is better for your project, business objective, and overall goals. Deciding between native or progressive web apps involves many considerations, given an app’s impact. Let us examine both progressive web apps and native apps to compare the differences between the two.

Progressive web apps (PWAs) are mobile sites designed to work and run like a native app and provide a similar experience. Once the PWA is installed on their device, most users don’t even realize they are using a progressive web app over a native app. Although these apps are technically a website when opened, the content is designed to deliver improved online and offline mobile functionality. A PWA can be added to the device’s home screen as well as offer a full-screen experience. The development of service workers provides PWAs with similar benefits to native apps, such as reliability, speed, offline access, and push notifications for enhanced engagement. However, there are still some scenarios where native apps may be a better option. Here is a breakdown of the key differentiators between PWAs and native apps.

App stores, such as Google Play and the iOS App Store, offer both native apps and progressive web apps (PWAs).

Native apps allow users to download and install any application approved by Android or Apple that appears in the respective app store. The user can find an app of interest through a keyword search or “window shopping” in the app store and download/install it. Once the app is installed, an icon is added to the device’s home screen, making it easily accessible to the user.

PWAs can also appear in app stores. In addition, they can be located through a simple web search in the mobile browser. This means that the company can, but does not have to, submit their PWAs to Google play or iOS to make them available to users. PWAs can be released/updated at any time, are designed to be fully responsive, run directly in the device’s default browser, and appear similar to a native app experience. PWAs can offer offline functionality similar to native apps. In addition to app stores, PWAs can also be installed from the browser. Once the user finds a PWA in their browser, they can then save the PWA to their home screen just as they would with a native app; however, installation is unnecessary. The only challenge the user may face is saving it to their home screen. Android devices allow users to install the PWA with a simple prompt. In contrast, iOS users must rely on old tactics of finding the “add to home screen button” within the URL for the app to display on their home screen. This is primarily due to the lack of a visual indicator within Safari that the website is a PWA.

The most important and apparent advantage of progressive web apps is that developers can develop a single app that displays and functions correctly across a wide range of browser platforms, devices, and screen sizes. This is all possible due to the capabilities of responsive design, HTML5, and other modern web technologies such as CSS, React Native, and Angular. Not only is this convenient for individuals who prefer different browsers, but it also bridges the gap between Android and iOS users. Additionally, this makes the development of a PWA more efficient and less expensive.

Unfortunately, the opposite is true for native apps. Native apps must be explicitly designed for the platform they are intended to run on. So, if an app is going to be available for both Android and iOS users, it must be tailor-made for each device. This creates a more user-friendly experience as the app is designed mainly for the structure of the mobile device. However, this is more difficult for the developer as they will have to write two separate applications if the client intends to have it available for both Android and iOS users and, thus, more expensive.

Both native apps and PWAs provide access to content within the app with poor or no internet connection through cached data. PWAs use service workers to cache the website’s assets while online to make them available to the user while the device is offline. These service workers can run independently from the app and help improve performance and features by managing network requests, enabling push notifications, and fetching cached data, allowing offline capabilities. If any part of the website is not able to be cached, it will not function offline until connectivity is restored because PWAs are unable to tap into the device’s data to remain connected at all times. Native apps handle offline capabilities similarly, through cached data collected while connected to the internet. But native apps can always keep the user connected by using the device’s data to retrieve data that cannot be cached. However, some native apps cannot use this feature and have limited offline functionality. 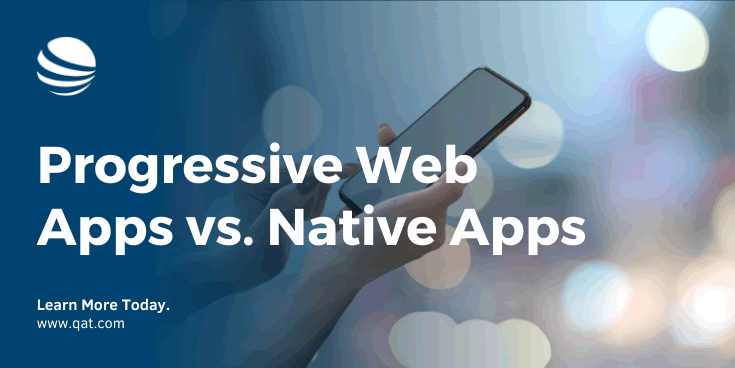 Another big difference between PWAs and native apps is the need for updating and maintenance to keep the app running in its most up-to-date form. Native apps require updating on both the business and user sides, leading to additional time and cost. PWAs only require maintenance on the business side, reducing costs by 80%. PWAs automatically refresh after a content update allowing users to use these features immediately without having to accept an update.

When native apps are downloaded and installed on a device, they attain the ability to tap into the device’s battery power, storage, and data and gain access to the device’s features. For instance, native apps can use features like the camera, GPS, contact list, alarm, accelerometer, calendar, messages, push notifications, and Geofencing. However, if the user does not want the app to use these features, they can customize these settings. Native apps also provide near field communications (NFC) support.

On the other hand, progressive web apps do not use much data, which can benefit users with limited data availability or those that live in areas where data networks are more expensive. Also, PWAs have limited capabilities to access the features of the device. Android devices support more options for PWAs than iOS. However, every feature depends on the APIs supported in HTML5, but the app will not sync to the device the way a native app can. As PWA technology develops better APIs, they are becoming more functional and bringing the capabilities closer to that of native apps. Chrome allows more feature accessibility than Safari, and desktop Safari allows more accessibility than mobile Safari.

The most significant factor that both businesses and users want is to ensure the security of the apps they are using. Protection for the company and user data is essential and is GDPR compliance. Native apps provide security through multi-factor authentication and certificate pinning. Multi-factor authentication adds an extra layer of protection for login functionality by requiring two or more credentials to grant access to the app. The app uses certificate pinning to prevent attacks by forcing the app to validate the server’s certificate against a pinned or known copy. This can quickly be done with a fingerprint. Since native apps are found in app stores, it provides another layer of security. To get a native app published to either Google Play or iOS and into the app store, they must be authorized by Apple or Google. Since unsecured apps are not likely to be approved, users can feel more confident that their information is secure.

While PWAs do not offer as many forms of security, they are served over HTTPS, which provides secure connections through the browser to server encryption. This encryption allows the PWA to provide a safe environment for the user. PWA’s can also leverage multi-factor authentication, just like using it through your browser.

Development cost is another crucial factor to consider when creating an app and delving into the app world. The costs of developing native apps and PWAs are quite different and often determine which avenue a company chooses. Since only one version of a PWA needs to be developed to display across a wide range of browsers and devices, it saves both time for the developers and money for the business. PWAs typically use a cross-platform framework like React Native or another similar framework and service workers to develop the application. This makes the code useable for both Android and iOS devices. Native apps, on the other hand, require several versions of development to be accessible on different platforms. Native apps written for Android users are typically built with either Java or Kotlin and Objective-C or Swift for iOS. Because two separate apps need to be developed with different languages, the code cannot be replicated, which results in a longer process with higher costs. A web version may also be necessary, depending on the nature of the app. In addition to development, maintenance is also required across all platforms, resulting in a higher cost.

Conclusion and Next Steps

Native apps and PWAs both have their place in the app world. As mobile usage increases, desktop use decreases, making it ever more critical for businesses to be accessible via multiple platforms, especially mobile. Both PWAs and native apps can provide this service and are equally valuable at increasing engagement and improving customer experiences. As technology evolves, PWAs are becoming more and more like native apps. Popular companies that have developed a PWA include Forbes, Pinterest, Twitter, Fandango, Lancome, Trivago, and The Washington Post. Ultimately, the decision between the two depends on what your company wants and needs out of the technology.

Whether the application you are looking to develop is consumer or business-oriented, QAT Global’s mobile and cross-industry expertise enables us to collaborate with you to create cutting-edge, secure, and scalable mobile apps that work across all popular platforms. We specialize in progressive web application (PWA) development and will work with you to deliver a solution that best addresses your industry-specific challenges, requirements, standards, and needs.

QAT Global is a trusted enterprise application development partner for some of the world’s largest organizations. Our development approach fosters flexibility, scalability, and security, and we emphasize building a long-term partnership. We offer customized services to enterprise companies based on their unique needs, whether it be end-to-end app dev, team integration, or staff augmentation. Let’s work together to develop the mobile solution that will enable your organization to achieve its strategic goals.