Skip to content
The Difference Between Front-end, Back-end and Full Stack

The Difference Between Front-end, Back-end, and Full Stack

What is Front-end Development?

Front-end development is the process of creating an application’s user interface (UI) and its underlying structure or foundation, known as the front end. The term “front end,” traditionally referred to as the content a user would see, now refers to all aspects of an app that users interact with. This includes things like design, interaction, navigation, and the visuals seen on the screen. A front-end developer would be responsible for testing and updating these components. Front-end developers are also responsible for creating an application interface that loads quickly, works across multiple devices, is accessible to visitors of all abilities, and provides a smooth user experience. 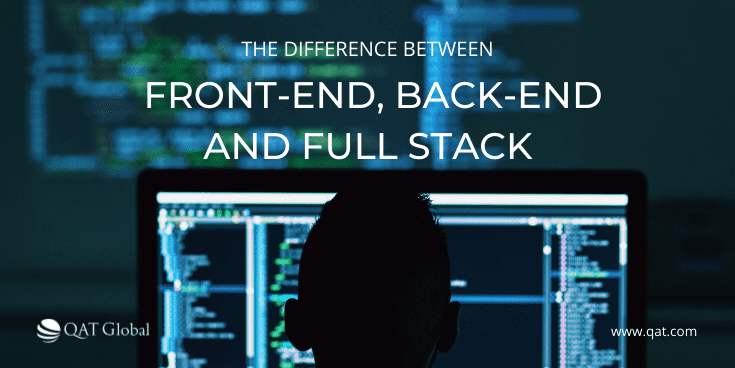 Front-end development includes both the design and coding of an application. The goal is to create a responsive layout that works on all devices.

This process typically starts with wireframes and prototypes. The wireframe lists out the different pages and content. The prototype is often interactive and demonstrates how the app will work when it goes live. These tools help create a better idea of how the application will look in practice for designers and developers, as well as users who test it out.

A full-stack developer is a person who has expertise in many layers of software development. Adept in both back-end and front-end development, they are the ones who understand the business needs and technology requirements that allow a software application to function across different devices, operating systems, and networks.

Full-stack developers work on all stages of the development process: design, coding, testing, and deployment. These developers can understand how all parts of a system interact and make adjustments as needed. They take responsibility for each application development stage, from start to finish, and utilize both front-end and back-end development tools.

In short, a Front-End Developer is responsible for how an application looks and feels to the user (the “user experience”), often making use of CSS/HTML skills. Back-end developers focus on the server-side, including databases, APIs, etc. A Back-End Developer is responsible for how data flows through an application, usually using Java, C#, PHP, and JavaScript skills. Full-stack developers participate at a more holistic view of the entire system from design to implementation, front-end and back-end.

At QAT Global, our teams are hand-selected, according to your development needs, from our expert staff and network of top front-end and back-end developers and designers in the US, Brazil, and Costa Rica. We have seasoned experts across a wide range of technologies and industries. From prototype to MVP or full production application, we will take your software from concept to launch. Get in touch with us today, and let’s discuss your next software development project!