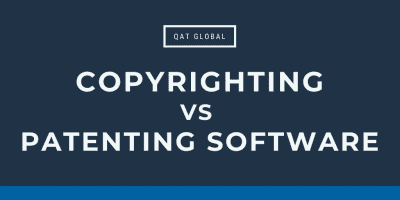 Copyright and patent licenses are almost like the twins of the US protection of the intellectual property world. Although they are very similar, they each have their own distinct features that set them apart. The US Patent and Trademark Office (USPTO) described copyrights as a form of protection provided to the authors of “original works of authorship” including literary, dramatic, musical, artistic, and certain other intellectual works, both published and unpublished. A patent for an invention is the grant of a property right to the inventor, issued by the United States Patent and Trademark Office. Software developers look to copyrights and patents to protect their ideas and creations, but it can be a challenge at times to figure out which would be best.

When looking at the description of both it can still be difficult to differentiate which one to pursue for your software. This has been a reoccurring issue for software developers and their source code. One train of thought is that software source code reads like a book, which is protected by copyright laws. Copyrights are the protection of an expression of an idea but not necessarily the idea itself. However, a patent provides broader protection that protects a concept or invention and prevents others from using or reselling it, which is something that widely-shared and easily manipulated software needs. Though both provide protection for software, the most common protection license currently being used is patents.

Software patents can be difficult to obtain. By patenting software, the developer protects the idea or concept of the source code. It does not matter the size of the software, but it must be a specific, useful idea. In the description for who can apply for a patent and what can be patented, the US Patent Office answers it as a person who “invents or discovers any new and useful process, machine, manufacture, or composition of matter, or any new and useful improvement thereof, may obtain a patent.” The idea cannot be an abstract idea, and it must serve a purpose. Software patents are becoming especially more difficult to gain because of stricter regulation. The patenting office has tightened up the application process to software patents to avoid patenting previously invented or known functions that are already published through software source code and computers.

Software developers are creating new ideas faster and more abundantly than ever. It is important for developers to be able to protect their ideas. When deciding which license to choose, both copyright and patent licenses will provide protection, but because of the process and overall safeguard, patenting software may be the best and most secure option.

Take the Steps for Success

You don’t have to have a firm decision made about copyrighting or patenting before getting started developing your software. The experts at QAT Global are here to execute on your vision and deliver cutting-edge software to your users that leverages best practices, emerging technologies, and modern engagement models. Using an Agile software development approach with proper planning and the right people on your team will put you on the path to success. The development team at QAT Global is experienced in developing all kinds of enterprise applications and SaaS products for clients in a wide variety of industries. Put your next software project on the path to success, start the conversation with our development team today.