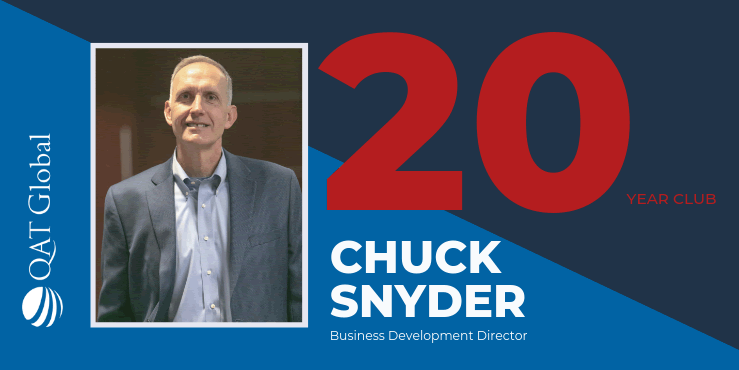 Chuck signed on with QAT as a part of the first sales team in 1996 has been with us ever since. He grew up in Nebraska City then attended the University of Nebraska-Lincoln. Shortly after graduating from UNL, Chuck and his high school sweetheart Lisa relocated to Des Moines Iowa Des Moines was not only one of Chuck’s favorite cities to live in, but where he began his journey with QAT Global. The early years were focused more on mainframe related needs and of course, the preparation for “all things Y2K”. We were recruiting talent like crazy from wherever we could find it. From coast to coast, India, Brazil, and Mexico. Some of those guys are Senior Managers still at QAT today.

In 2005, Check and his family made the decision to move back to Nebraska and the home office in Omaha. As a Director of Business Development, Chuck plays a crucial role in generating new business for the company. He helps to connect our current and future clients with the custom software development services QAT provides. He finds balance in managing our existing accounts with being the person his customers call as needs arise.

Chuck’s field is filled with constant change. QAT is driven to stay a step ahead. Today, Chuck is focused on communicating all of the solutions QAT Global’s nearshore centers in Brazil and Costa Rica are providing its current and prospective customers. My job is to be that first point of contact to a prospective client. To articulate the expertise of QAT, establish that relationship whereby the customer eventually chooses to partner with QAT.

When you are with a company for as long as Chuck has been, you get the opportunity to see it grow. QAT Global’s 25th anniversary will be coming up this next year. Chuck has been part of almost all of it. He discussed how, as times have changed in the technology industry, the fast pace environment has pushed him to grow and change with it. He appreciates that as the company has grown, more people to have come to depend on him, and he has more responsibility that affects others on his team. Chuck commented that the stakes are continually growing and its never a dull day even after 20 years.

When asked why he has stayed at QAT Global for so many years, Chuck considered and then said, “if you leave a job, it is for one of two reasons. You either feel like there is something better out there, or you are running away from something.” In his 20 years of working here, Chuck has never felt either really applied to him, so he has stayed the course, believing in the company and his role in it. He described the Omaha office as a family atmosphere, where he has gained lifelong friendships. 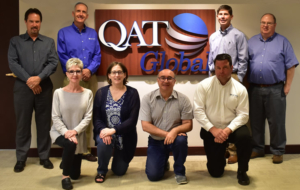 He describes the culture here as a place where everyone’s opinions and ideas are sought and listened too.” Chuck appreciates that from the beginning, he had had the opportunity to be a part of the company’s success over the years.

He described a core value of the culture as the right balance of autonomy and then too, working together as a team. There is a level of trust and independence that balances out the whole company.

From those early days of working from a tiny desk in his dining room in Des Moines to the downtown Omaha headquarters today, Chuck feels extremely blessed for what has been a wonderful career.